Southland-Bound: On the Road to ‘Medicine’

As blessed as Northern California assuredly is, Los Angeles must also sometimes be attended to. And so it was that on the first weekend of May Leon bundled me into the car for that most California of endeavors—the road trip.

Intent on salving a horrific birthday number with the cheering sight of contemporary art paired with excellent food, we caroomed down the I-5 throughway at those speeds demanded by the sheer boredom of the scenery.

In our minds, I-5’s Pea Soup Andersen’s is always in sepia.

Destined for a sweet Airbnb casita in Santa Monica, we were blessed with an opposing commute all the way west, streaming the 405 to the 110 without incident. That night’s meal was slated for Red Medicine, an innovative Vietnamese-inspired place on Wiltshire. The plan was to visit museums by day and restaurants by night. Perfect!

After unpacking, we gave ourselves a full 70 minutes to navigate by car from our digs to the restaurant. Some 90 minutes later, we had successfully traversed the entire seven miles. “Came from the West, huh?” the waiter asked sympathetically. 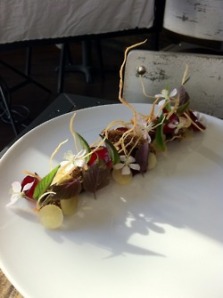 This is beautiful. This is also, tra la, lamb belly. Would you have guessed?

Red Medicine is an interesting place. While the food was invariably delicious, it was also cranky, difficult, and sometimes so heavily beflowered that one felt like Ferdinand chomping down on expensive clover.

Chef and restaurant co-partner Jordan Kahn is reportedly the youngest person to ever work the kitchen at the French Laundry. He moved to Per Se, then on to Michael Mina’s eponymous SF house, blooming only upwards from there. His vision is entirely unique and fresh; sometimes, it’s also exhausting.

Cocktails, for example, are described merely by taste points. I had the #84 ($12), which promised “citrus, herbs, and fern” (or something very much like that). I had to ask what liquor enlivened it when the server brought it over. I’m game, it was gin, and yes, it was yummy—but I do wonder about spending $12 on not liking gin and other potent surprises.

The Japanese scallops ($19) were served raw in the bottom of a large, high-sided glass terrarium bowl. A plain yogurt powder was sprinkled upon them and they were gaily festooned with all manner of flowering herbs. A sous came impishly from the kitchen, poured a generous flask of green melon “water” over the stuff—and dinner was served. While the dish was fresh and tangy and assuredly from the sea, it was also an impossible task to politely liberate the scallops from the terrarium’s bottom without causing them to dragged up the clear glass sides, smearing white yogurt powder like a bad toothpaste stain as it went.

Chicken dumplings ($9) had not a whit of pastry about them but rather, were spoon-shaped mounds of gorgeous ground chicken meat, deftly cooked and served with a small arsenal of homemade accoutrements including housemade Srirachi and an accompanying bowl of  butter lettuce serviettes. Lovely! As were the upended crab spring rolls ($15) and the very edible charred brussel sprouts ($9) served like a finger food with basil leaves and shrimp chips. The simpler the food, it seems, the more the ingredients and the chef’s intelligence shines from the plate at Red Medicine.

Of course the server inquired about dessert and of course we asked for menus. It was a deeply discouraging list of unusual ingredients that would need to be inquired about, all requiring an attentive palate still quick after a long and inventive meal. The server returned.

“I just want,” I said quietly, “a fucking cookie.”

He glanced quickly around. “We keep trying to tell him,” he said, jerking his head back toward the kitchen, where Kahn could be seen grabbing a small handful of herbaceous flowers assuredly destined for a terrarium.

“At least we got him to compromise on the music.” And indeed, a middling dribble of nonoffensive sounds had been playing all evening instead, one supposes, of the avant-garde Vietnamese neopunk compositions that Kahn might presumably have demanded.

We paid the man and went back to Santa Monica.

Which took, by the way, exactly 11 minutes.

Sift through the Crumbs